Microsoft has officially stopped selling Windows 7. Wait a minute and let that sink in. Windows 7 Professional was cleared for sale until October 31st and is no longer available. Unless there is stock currently available at a store.

Windows 10 is listed as being supported indefinitely because, according to Microsoft, it’s the last version of the operating system they’re going to build. An interesting concept/idea, but one that we suspect not to be true.

There’s a great deal of institutional expectation built into the idea of periodically updating one’s operating system. Think about how our organizations upgrade and update both operating systems and applications. And Microsoft would be the only company currently claiming its current OS is now static. Android, iOS, and macOS all still use version numbers. And according to a couple articles that I read, it is expected that Microsoft will eventually release a “Windows 11”.

According to the Microsoft lifecycle fact sheet, “End of sales refers to the date when a particular version of Windows is no longer shipped to retailers or Original Equipment Manufacturers (OEMs). Examples of OEMS are Dell and Toshiba—PC manufacturers who often preinstall Windows software”. 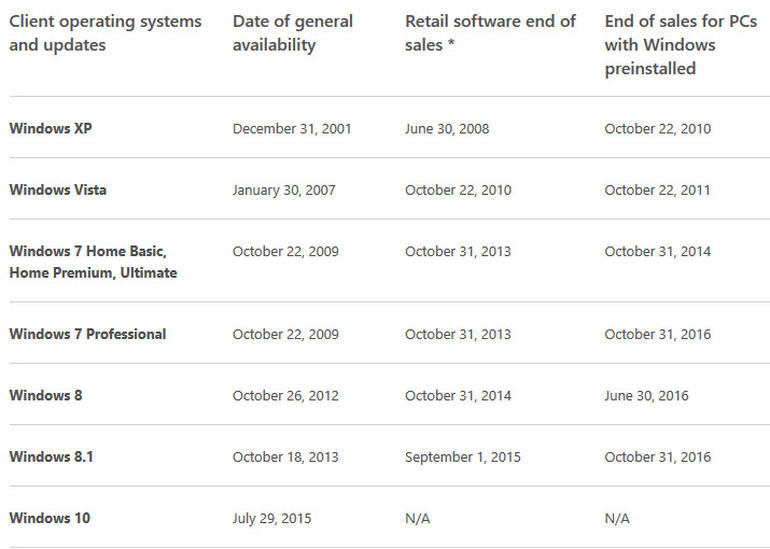 * Note that when the retail software product reaches its end of sales date, it can still be purchased through OEMs (the company that made your PC) until it reaches the end of sales date for PCs with Windows preinstalled.

If you are planning on keeping Windows 7 in production, the following suggestions are important: